10 things that will surprise you about Bournemouth.. Especially no.8! 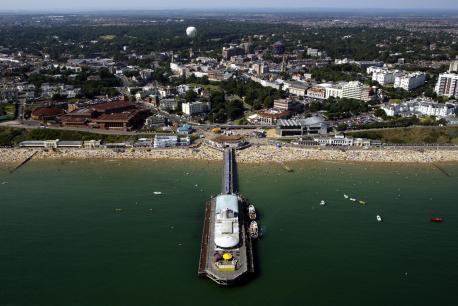 Elite Living is a boutique daily deals website for Christchurch, Bournemouth, and Poole. Check out all the current deals available at www.eliteliving.club

1. Amanda Holden rode around naked on a bike

Actress Amanda Holden once rode around Bournemouth naked on a motorbike after being dared £20 by friends. After whizzing round the block she shouted ‘say no to crack’ at a security guard.

After Liverpool and London, Bournemouth is the UK town where the Beatles played the most concerts and their cover for their second album With the Beatles was a photograph taken at the Palace Court hotel in 1963.

3. A weird egg video that attracted thousands of viewers was filmed on Bournemouth beach.

A member of the public @Danny85bournemouth came across this weird egg that was washed up on Bournemouth beach in 2011 and posted the video on Youtube. The video received more than 420,000 views.

Danny said: “This massive egg, urchin thing was on the beach at Bournemouth this morning – it stank, my friend kicked it, it was like a massive shell. There was something inside.

4. Bournemouth enjoys a whopping 7.7 hours of sunshine a day

There is on average 7.7 hours of summer sunshine a day in Bournemouth and 4.7million tourists flock to the town every year.

5.  The co-founder of Rolls Royce became the first British man to die in an aircraft crash.

The fateful day in Bournemouth was July 12, 1910, which saw the aviation pioneer Charles Rolls, having crossed the channel by balloon in 1906, die in a horrific crash.  Rolls made more than 200 flights in his Wright Flyer, made under license by Short Bros. On that day its tail broke off with deadly consequences for the pilot.

6. Bournemouth has been the home for great writers

Literary masters JRR Tolkein and Enid Blyton lived here and Robert Louis Stevenson wrote ‘The Strange Case of Dr Jekyll and Mr Hyde’ at ‘Skerryvore’ the house he shared with his wife in Westbourne.

7. Bournemouth serves up more than 2,000 ice creams a day

Every year an average of 750,000 ice creams are bought on the seven miles of Bournemouth’s seafront. That’s more than 2,000 a day.

8. The Great train robbers were arrested in Bournemouth

The first arrests in the Great Train Robbery investigation were made in Tweedale Road, off Castle.

It was a moment that could have changed the course of world history. In 1892 a young 18-year-old Winston Churchill fell from a bridge in Bournemouth. After falling 29 feet he was unconscious for three days and his injuries left him bedridden for three months. Decades later and historians are still arguing whether it was in Alum Chine or Branksome Dene.

Later on in 1940, Labour leader Clement Attlee made a historic phone call from the Highcliff Hotel which ensured that Winston Churchill would be Prime Minister.

10. The IRA tried to blow up Bournemouth pier when it bombed the town

In the summer of 1993 six bombs, believed to have been planted by the IRA, were planted in Bournemouth. Four went off destroying a furniture stores Maples and seriously damaging three other shops. The same night a bomb-damaged the pier and a second was defused by Police. No one was hurt during the blasts but the damage was estimated at £1million.